The one word that explains Trump 2016 victory: Hillary 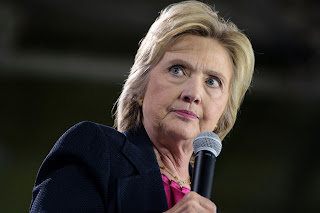 Two plus years later, Buzz and I have come to a definitive conclusion.  Donald Trump won the Presidency for one reason and one reason only --- Hillary Clinton.  Bernie Sanders or even Martin O'Malley, Lincoln Chafee, or Tim Webb (yeah the three other Democratic candidates) would be touting the title of the 45th President of the United States.

It took some time to realize exactly how bad of a candidate Hillary actually was.  It doesn't have anything to do with Benghazi or the missing emails.  They were made-up BS scandals that were disregarded by a vast majority of American voters, and remember, Hillary did beat Trump by over three million votes.  What it really came down to was what Hillary talked about 25 years ago --- the "vast right-wing conspiracy."  (Well maybe not vast, but persistent as all hell.)

For years and years, the GOP has been railing against Hillary Clinton.  The fact that she is not the warm and fuzzy candidate like her husband Bill made it easier for the attacks to stick.  Even good liberals had serious trouble warming up to her (hence the Feel the Bern.)  (And for those of you who believe Bernie got burned by the Democratic National Committee (DNC,) remember this, Hillary still kicked his butt in the popular primary vote and all those rules which favored Hillary had been in place for years --- they weren't changed mid-stream by Debbie Wasserman-Schultz or any other nefarious DNC figure.)

Don't get us wrong, we believe Hillary would have been a very good President, certainly much better than Trump could ever be, but even Buzz and I never really warmed to her.  She would have been an overly-hard worker who wouldn't continually embarrass the office home and abroad.  She also would not have prided herself in ignorance to all things Presidential.

Trump won in 2016 because the Founding Fathers set up this crazy thing called the Electoral College, a system which gives a disproportionate advantage to smaller states.  (Electoral votes are based on Congressional representation (one vote for each member of the House and one for each Senator.)  That's kind of fair for the House numbers, but totally undemocratic for the Senate number.  The state of Wyoming gets one electoral vote for 300,000 people on the Senate side, whereas California gets one electoral vote for 20,000,000 million people.  In other words, all things being equal, the California equivalent would be about 67 Senate based electoral votes.

Because of the Electoral College set up, Trump was able to win the Presidency by getting pluralities in three states --- Michigan, Pennsylvania, and Wisconsin.  The margin in these three states was 77,744 votes.  Trump's victory was the perfect storm of Electoral politics.  The big question is, can he repeat the perfect storm in 2020, that is if he survives until then.  Short of impeachment, Trump will win the Republican primary without any significant opposition.  A good majority of Republican voters have retreated to such a fact-free bubble that Trump could "shoot someone on 5th Avenue" and get away with it.  Their bubble is so impenetrable that only alternative facts get in.

The Presidential Primary season begins in about 11 months, and there are already enough Democratic candidates to field an NFL team, with a least a few more guaranteed to enter the fray.  Trump will get some opposition, but as for the reasons mentioned above, unless he's impeached, he will be the Republican nominee in 2020.  He has insulated himself so well that even in the Robert Mueller report says Trump should be indicted, only an impeachment vote by the Senate (and that would require 20 GOP Senators to join the Democrats to vote for impeachment) would derail Trump's re-election.

The other problem Trump faces in 2020 is that fact that the voters who fueled his narrow 2016 victory were either first-time voters or voters who had not voted in any recent Presidential elections.  Sure some of them will vote again, but at least half of this usually apathetic group of voters will not venture to the polls again in high enough numbers to fuel another Trump electoral win.

So as long as Hillary does not win the Democratic nomination, Trump will not be in the White House come the afternoon of January 20, 2021, and to paraphrase Gerald Ford, "our long national nightmare will be over."